I’ve lived a very interesting life filled with travel and adventure. Whether SCUBA diving, parachuting, writing a book chapter on the Muppets, back-packing in Canada and Thailand, or giving an academic presentation in Kyoto, you can be sure that I’ll be living life to the fullest and always ready to explore. I’ve been involved in teaching and technology for most of my life, having been a university professor in computer science at several Canadian universities. I’ve also been a source code analyst for patent infringement lawsuits and a software developer.

I have a transsexual background and completed my sex-change many years ago. As far as I’m concerned, I’ve finished any transition and am now just a normal woman.

I don’t tend to watch much television. I’ve got a modest collection of favourite shows on DVD, either science fiction (such as Star Trek, Firefly, Defying Gravity, and Babylon 5) or historical Roman (such as Rome and Spartacus). That’s about all I really watch when I’m in the mood. There are so many better things than to be sitting passively waiting to be entertained and getting really bored in the process. I’m also not very up-to-date on popular music, though I have listened to a little bit lately. Mostly, I like old Motown and disco, though jazz, blues, country, and soft rock (particularly female vocalists) also appeal to me.

Although I lead a rich and experience-filled life, with plenty of travel, I find that computer gaming and online virtual worlds allow me to explore when work, finances, and other obligations limit my opportunities. Right now, my work obligations require much of my free time so I’m “retired” from gaming apart from visiting friends in Second Life. If I actually encounter people to play with and can turn it into an enjoyable social activity, I may return to the gaming realm, but for now I don’t have the time or interest.

In combat games, you will find that I tend to play a ranged DPS (Damage-Dealing) character. I find it easier to run away and avoid combat when one’s primary weapon is a bow or magical gun. Also, I’m not very good at most games and tend to avoid really difficult content, so I wind up playing alone and ranged classes seem to favour my solo style of play. I tend to focus on PvE (Player-vs-Environment) and questing, while avoiding PvP (Player-vs-Player) activities. Computer generated monsters never get hurt feelings or seem to care about being killed; other players do!

To date, I have tried the following online virtual environments/games: 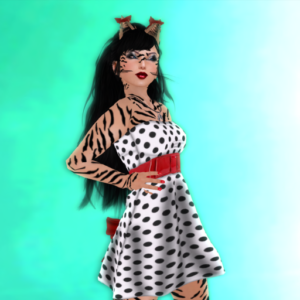 I will always be spending time in Second Life. I love the ability to build and create that it offers. I’m passable in LSL (Linden Scripting Language) and have developed some Photoshop (moderate) and Blender (minimal) skills for performing content creation. I also role play as a morally challenged, delinquent, but good hearted neko.

I used to play a blood elf hunter in World of Warcraft. Mostly I did solo quests and collected pets. I don’t like the endless changes in games, since I’m there to relax in a different but familiar world. Consequently, I have generally given up on Warcraft as I encountered too many changes that resulted from the Battle for Azeroth expansion. I also got tired of playing alone as nobody really appreciated my relaxed, casual, style of play.

is an awesome site where you can manage your pet collection in Warcraft.

is probably the best resource available for Warcraft players. I whole-heartedly recommend and endorse it!